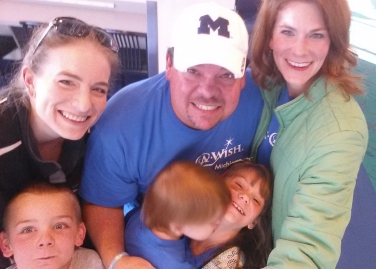 Here we are arrived at the airport on time thanks to our chauffer aunt and nephew! No limo, but we’re all smiles! 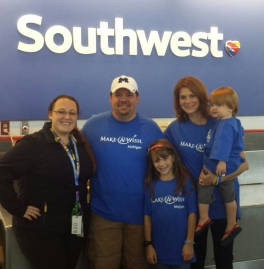 Southwest airlines comps flights for Make-A-Wish children and their families to travel to their wish destinations!

We’d left the house without the promised limousine service (see that story here), but what we got was even better. Our sweet, five year old nephew, who could have focused on being sad at not being a part of this fun trip to Disney World instead, was waiting excitedly on his front porch with small toys he’d pulled from his own collection to gift to Mercy and Pierson for entertainment on their plane ride. He was precious! Jo was happy to take us, and insisted on walking us in. She took pictures of us with the kind Southwest personnel as we checked our luggage, then the kids enjoyed watching some planes taxi. Selfies, hugs and we were off through security on Mercy’s great adventure trip, decked out in our brand new MAW T-shirts, sent on our way by the love of family. Love and happy anticipation: the sweet life!

MAW Michigan had requested we consider wearing our T-shirts and that we get photos in front of a Southwest sign, so they could include our picture in a thank you album they send to the airline every year for their generous donations of air miles to Make-A-Wish children and their families. We were more than happy to comply. I can think of only a handful of other times in life where what I was wearing made me that proud. I was proud to be associated with an organization dedicated to bringing joy to hurting children, proud of my own daughter for her courage, and proud to be a part of my family unit.

The magic began immediately. Southwest workers, baggage claim clerks, security guards, pilots, and stewards/stewardesses began investing in making this trip as full of smiles and as stress free as possible. They made Mercy & Pierson laugh. While I was in the restroom, I got a text from Dan to hurry back to the gate because they were boarding our family as preferred status, right behind the wheelchair travelers. Rushing back to the gate, I found stewards presenting our children with a bag of hurriedly-thrown-together goodies of snacks, tags, and airplanes, apologizing profusely that it wasn’t “more” because they hadn’t had a lot of time to assemble it. We hadn’t even boarded the plane, and Dan and I were already choked up.

There was one exception to all of this celebratory hoopla. After the few wheelchairs had been rolled down the gate ramp, our family approached the smiling boarding agent with our passes. At this moment, another father, who was waiting at the front of the normal boarding line, in his preferred status position, yelled across the divide to the boarding agent. “Hey! Are you starting the preferred and family boarding now?!”, he demanded. His family had been waiting in the “first” spot longer than our family had been standing. A seasoned traveler, he knew we weren’t following protocol on where, and in what order, we were supposed to stand, and he was annoyed. I, on the other hand, not a seasoned family airline traveler was mid-stupid-question to the boarding steward when this father interrupted us. With his back still turned to the preferred line, the steward rolled his eyes so only I could see and answered the outraged dad with: no, but he’d board their family soon. Then, the steward gave me a wink and a smile and escorted us down the ramp to our choice of seats on the flight.

The children did great flying. Pierson was a perfect antidote to Mercy’s inherent anxiety of being airborne. She had to be the big sister, to be strong for him, to show him the ropes since she’d flown before. Dan and I (and I’m sure everyone around us even though they didn’t know to be) were deeply relieved. (Mercy’s flight-anxiety monologues can be both loud and long!) PJ was not a fan of the seatbelt sign remaining on for so much of the flight, but he adjusted to the routine of me pulling toys out of his backpack every five minutes and settled in for the three hour flight to Orlando.

A daughter of “demanding dad”, who’d seated his family right behind us (in the next-closest-to-the-front row available), told Mercy this was her birthday trip to Disney. Mercy congratulated the girl and replied that she was on a Wish Trip. Demanding dad’s daughter didn’t know what that meant, so she told Mercy she’d been to Disney ten times, one time for every year of her life. Mercy told her she’d never been. Then, the girl explained they’d be staying in a grand resort. A steward who had caught the gist of this conversation said Mercy was staying in a very special resort for very special children. Looking directly at Mercy, the steward continued, all smiles, “There will be ice cream for breakfast. They will take excellent care of you there!” Demanding dad’s daughter stopped talking. Sometimes, silence is golden.

In Florida, we were met by a wonderful representative of the Give Kids the World (GKTW) family, Amber. Amber looked like a young Nicole Kidman, had a beautiful accent, and first introduced herself to Mercy, stooping down to our daughter’s level and calling her “Princess”. Amber carried a GKTW sign with Mercy’s name printed on it, pushed a luggage trolley for us, and led the way from baggage claim to the rental cars. On the way, she told us as many exciting tidbits as she could about the Village and Disney: there are parties every night, every child gets presents, Mickey will come to visit, there are pools and ice cream and horses to ride, trains to catch, favorite princesses to meet. She painted the dream-scope wide and vivid in our children’s minds and we saw them light up with anticipation.

After vehicle registration with Dan, Amber led us to a row of vehicles owned by National Car Rentals. National was comping our rental for the entire week, had filled the gas tanks to the brim, and commanded Dan to “bring it back as empty as you can”. There would be no gas charge for our family during this Wish Week. Dan was misty when he relayed the conversation back to me. Never before, and probably never in the same way again, had we ever felt so deeply indebted to the generosity of strangers.

Sweeping her arm up and down the row at the vehicles available, Amber asked us, “Which one would you like?!” Mercy chose a black, 2016 Town and Country minivan, with leather interior, two DVD players and every modern electronic amenity. After photos, Amber presented the kids with a thermal snack bag full of treats, gave directions to the Village and sent us on our way.

Less than thirty minutes later, we pulled into the front gate of Give Kids the World Village: A place we’d never been before and would never live in again, but a place our hearts would quickly embrace as a forever home away from home.