Our most unforgettable evening at Disney was a mistake.  When you only visit once a decade, you’re there with your kids for the first time, and you’re currently weighing your toddler’s no-nap, fatigue-induced insanity level against your older child’s seizure frequency,  errors are bound to be made.  Shockingly, my family continued to follow my lead as I checked show times and locations on my Disney app, between these other assessments. Their first clue that I was no longer a viable source of information should have been the way I crashed into a Hollywood Studios coffee cart, begging for a double pumpkin espresso, “the tallest you’ve got”, early Tuesday evening, with temperatures still hovering around 80 degrees. Incredibly, my family continued to trust me, sweating and babbling as I chugged my hot, synthetic-energy producer. The poor sheep followed blindly along as I promised we’d be sitting in a theatre watching Belle and the Beast weave their enchanted love story in no time!

Oh, we saw Beauty and her Beast….Hours later. On a boat with Geppetto. With laser beams and rocketing jets of water spraying arcs over their heads.

What do you mean you don’t remember Geppetto, lasers, boats, and jetted water in the classic fairy tale??! That’s totally the way it goes!

IF, that is, you end up in line for the Fantasmic Amphitheater believing you’re awaiting entrance to the B&B stage.

In my defense, we were near the correct stage, it was a good two plus hours before Fantasmic was supposed to start (why would people be trying to enter that already, I thought?), and there were Beauty and the Beast flags hovering overhead. As the line inched forward, however, Mercy and Dan began to question our destination when Disney villain signs began appearing and loud speakers began announcing items prohibited in the Fantasmic Amphitheater. There was no easy way out. We were sandwiched between barriers ahead of us, and a sea of human flesh behind. Clearly we were going to miss Beauty & The Beast’s stage production. Resigned, Mercy asked, “OK. When does this show start?”

The answer to that question was “an eon from now”, but I think Dan distracted her with the promise of really good seats or something. That, and more snacks pacified our children until they finally opened the gates and the line began moving forward.

After parking PJ’s stroller in the designated location, we rolled the kids’ wheelchair to the bathrooms for the quickest access we had to a Disney commode all week. Two hours before the show, the ladies’ room was a ghost town, so Mercy got in and out. I took my time. Why rush, when we had a couple hours to kill before the show, and it was so quiet and air conditioned in there? (Plus, I’d just drank A LOT of coffee.)

When I finally emerged, Dan and an official Disney photographer were wildly snapping photos. There I saw our MAW child receiving ‘Honorary Custodian’ stickers and being invited to help them. Even custodians have fun assignments at Disney! Mercy was given a round, wet sponge attached to the end of a long pole, while Disney custodians used jetted hoses to draw a huge Minnie Mouse head onto the pavement. “Your job is to add polka dots to Minnie’ s bow, Mercy!”, they smilingly instructed.

When her artwork was complete, Mercy re-settled herself into her wheelchair next to Pierson, jabbering about how much fun she’d just had. Before she could finish sharing all of her happy, pavement-painter thoughts, another Disney Cast Member approached.  “Roll this way!”, he exclaimed brightly, “I have something for the kids to see over here!” Not knowing what was coming next, but still having plenty of time to kill, we followed our new leader.

“This”, he said, “is our cart of light up toys! Check this out! There are light up swords and wands! Bubble makers and music makers! Mouse ears that light up and pulse interactively to the show!” Playing the role of “Music Man”, selling the virtues of his widgets, he had Mercy and Pierson captivated as he began pulling toys off the cart, demonstrating their features. Finally, having sung the praises of each gadget individually, the Disney Cast Member looked at Mercy and asked, “Now, which one would you like, Princess?”

Mercy looked at me, and I looked at Dan. We knew this salesman had hooked our kids. They really wanted his amazing toys. Dan and I nodded at Mercy, giving her permission. We hadn’t yet bought any souvenirs. (Who needed to, when the GKTW Village was leaving our children gifts every night, and thoughtful friends had sent surprise gifts with us?)

Tentatively, Mercy said, “I think I’d like a wand, please”.

“Excellent choice, Princess!”, encouraged the Cast Member, “And, what shall we get for your brother, the little Prince?”

“Pierson likes bubbles and music”, gushed Mercy, remembering a toy that did both.

“Do you understand the mouse ears light up to the music of the show?! Why don’t you pick out a pair of ears for yourself and a pair for your brother too!”, he pressed.

I glanced at Dan who was glancing at me. This was getting out of hand. We’d be buying every toy at this kiosk if this charmer continued. Mercy was giving us a questioning look like she knew buying more stuff wasn’t a great idea, but how should she respond? Catching our looks, realizing what we were thinking, and acting before we could get a word in edgewise, the chatty Cast Member stooped down to look at Mercy and Pierson on their level.

“And, who“, he questioned them slowly and seriously, “is going to pay for all of this??”

Mercy was stumped. Pierson, sensing this man’s serious tone, stopped looking at the bubbling light up toy and stared at the Disney Cast Member instead, as he dramatically let silence and confusion wash over our kids. By now, Dan and I had guessed what was coming, but couldn’t believe it.

“Why, MICKEY MOUSE, of course!”, he exclaimed, answering his own question. “Mickey told me himself; He wants you to have these gifts, Princess!!” And, as an aside to us parents, in a whisper, “And don’t you worry about it for one minute. Not everyone knows this, but Mickey’s loaded.” Dan and I expressed our thanks, realizing it was the Genie (read about a Wish Child’s Genie pass here) who’d “told” Mickey’s emissary to present these gifts. Mercy began to cry. 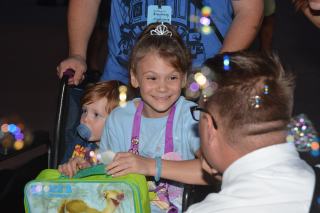 A Disney Cast Member stoops to ask Mercy who will be paying for her toys?

Mercy crying as she realizes she and Pierson are going to be gifted toys from Mickey Mouse.

Too choked up to repeat anything more than, “Thank you! Thank you so much”, over and over, Mercy and Pierson put on their gifted mouse ears, as another Cast Member showed them how to operate their toys.

Pierson entranced by his singing bubble wand, a gift from Mickey Mouse. 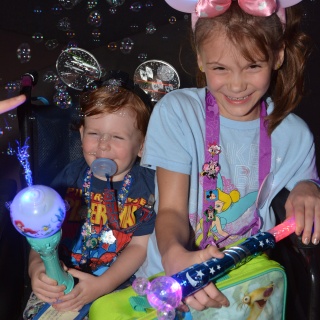 Mercy and Pierson with their Star Wars & Minnie Mouse, interactive, light up ears, and toys.

But, he wasn’t done. “Let’s go see what we have to eat around here!”, the “Music Man” suggested as he waved a beckoning hand and led the way toward a snack kiosk. And soon enough, we were balancing light up toys and Mickey’s newest gifts of candied almonds and popcorn, as we were led to the front of the amphitheater.

Mercy was overwhelmed. Because we’re attempting to raise grateful children, and because they had no prior Disney experience of their own to reference, Dan and I had consciously tried to point out some of the extra perks of being on a Wish Trip, as we’d encountered them. But, some things were blatantly obviously excessive, even to an 8 year old, and needed no parental highlighting. Mercy was young in years, but she was wise in life. “It’s too much! All of this is too much! Everyone is so kind to me! The people at the Village. The people at Disney. At the Boutique. Why are they doing all of this for me?!,” she looked at me, crying.

Why?? How often had we heard that question from her over the past year? How often had we whispered it in our own hearts as a prayer only God could hear? How ironic to have the answer to this ‘why’ be the reason we’d asked all the others.

We could have answered with something like, “Because you deserve it, kiddo!”, “Because you have a magic genie!” or “Because you and your brother are so darn cute!” Sometimes, we take these easy distractions. But, I knew in this moment, Mercy was not going to settle for anything less than honesty. Mercy already knew what her year had been like. She could never forget. People who avoided the subject or tried to change it when she brought it up only made her feel it was taboo to them. It never stopped her from remembering.

“How can I thank them? I keep saying thank you, but it doesn’t seem like enough.”

“Someday, Mercy, you’ll have a chance to be the one who cares. There will be someone in your life who is hurting and you’ll know exactly how they feel when their world turns upside down. In that moment, God will whisper what you can do to help them know you care and that God cares. And, when that happens, if you obey His voice, and show great love to that hurting person…you will have said your biggest ‘Thank You’. We say thank you best by loving others the way we’ve been loved.”

We held each other tightly, light up toys and yummy snacks forgotten. Teachable moments, one Christian parent’s advice rang in my head, may arise at the most incongruous times. And as I taught my daughter what I knew was true, God re-taught me Himself. Life can hand us no evil mistakes, including epilepsy, which He can’t transform into beautiful art. It isn’t that the mistake isn’t inconvenient, painful, and darn ugly. It’s simply that darn ugly doesn’t phase or impede a Master Artist.

Through the creativity and generosity of caring people, those two “mistake” hours at the now-packed amphitheater had flown by. Mickey’s island stage lit up and Mercy and Pierson’s mouse ears began pulsing to the rhythm of the Fantasmic music pounding in surround sound! Mickey and his friends weaved a scary tale, through projected water screens and waving lasers, about evil villains forcing terrors upon innocents at their mercy.

But we smiled, already knowing how the story would end.

Evil never prevails against a Master Artist, and an army of caring friends.

Do you remember teachable moments with your kids that popped up in ways or settings you would not have envisioned? Have you ever made a mistake- or just been subjected to a life evil – and watched God change it into something beautiful? Share your story with me, below! I’d love to hear them.

One thought on “Fantastic Fantasmic! (12)”