“Here you leave today and enter the world of yesterday, tomorrow, and fantasy.” –Placard at the Magic Kingdom, Walt Disney World

THE WORLD OF YESTERDAY

We were four days into our daughter’s Wish Trip and on our final day at a Disney Park. Up until this point, Pierson had been positively reluctant to meet any of the Disney characters, climbing me like a ladder and clinging to my neck through every meet and greet. Although the characters had been successful in making him smile and laugh, he had refused to leave the protective circle of either his daddy’s or my arms to hug any character or even stand near them for pictures with only his sister.

Cinderella changed all of that.

In 1950, Disney released its original Cinderella movie. Shortly thereafter, my grandparents took their children (my mother and her sister) to see the feature animation. This was a huge treat because, unlike today, children’s movies were not bi-monthly releases. So, my grandpa forked out approximately 50 cents per ticket to entertain his family at the show: a luxury. As my mother used to tell the story, 30 minutes after the movie started, my aunt was scowling as the whole family exited the theater, my mother (the eldest) in tears. Mom had become too terrified of the evil stepmother and her stepsisters to endure the rest of the film and the whole family had had to leave. (Sorry, Aunt Vicki. I hope you eventually got to see the VHS release in the 1980’s.)

In contrast to the female villains’ biting, shrill and sarcastically harsh intonations in that flick, Disney’s original animated Cinderella spoke in a high-pitched, sugary-sweet and soft voice. Sixty-seven years later, she hasn’t aged a day and speaks with the same lilting-ly kind voice when you meet her at Disney. And because of that voice, my son…Loved. Her. For the first time all week, in the presence of a character, the little prince released his Iron-Man grip on my hand and headed toward this sweet vision in blue for a hug and a photo. Here he is all star-struck… 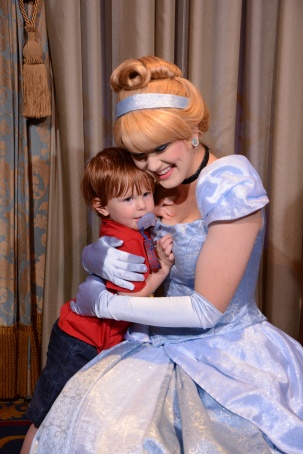 This was definitely a highlight of our “yesterday” experience at Disney. Vying for equal billing, however, were the Small World Ride, Dumbo the Flying Elephant ride, Mickey’s Philharmagic 3D movie, and the Peter Pan 4D ride where we became lost boys of Neverland, just hanging out with Peter Pan, as we soared over the streets of London and the mountains of their make-believe land (in our flying boat, of course), watching the classic tale unfold. Click the link if you’d like to watch a Youtube video of the ride, and think of all the joy you find when you leave the world behind because you can fly!

THE WORLD OF TOMORROW

As I mentioned in my first Magic Kingdom blog, the park was jam packed because people were mourning the presidential election results. However, despite having to wait in line each time (even with unlimited Fast Pass access) Tomorrowland Speedway was a huge hit with our kids. They insisted on riding 3 or 4 times, mostly because they got to race loud, gas powered cars around the track, and partly because the Cast Member at the head of the line traded pins with them every time they came through.

At Buzz Lightyear’s Space Ranger Spin we all got a chance to shoot lazer rays at invading aliens, while our spaceships whirled in every direction, and we racked up points for every target hit. After this ride, we accidentally swiped our photo card against the wrong kiosk screen and now are the proud owners of random photos of complete strangers battling galactic enemies with Buzz Lightyear. Try not to be jealous.

THE WORLD OF FANTASY

As dusk began to settle over the park, the children and I went to take part in the Enchanted Tales with Belle at the Beauty and the Beast castle. (Remember how we’d completely missed the Beauty & the Beast stage production at Hollywood Studios (click here)? Well, this pretty much made up for that.) In this attraction, guest children are given different parts to play in the tale as old as time. Mercy was chosen to play Mrs. Potts because of her superior hopping skills (thanks for the practice earlier in the day, Tigger). (Pierson did not want act. He wanted to watch.) After being given their lines, and a tiny practice window, the mini actors were escorted into Belle’s library and then “surprised” her with their show, when she entered minutes later. 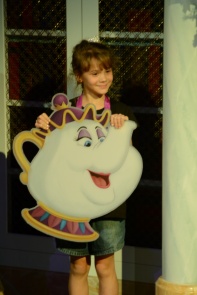 My children both love mer-people, so meeting Ariel, the famous mermaid,  in her underground grotto, and journeying Under the Sea,through the musical, mermaid-to-human transformation ride, made us feel like a part of her aquatic world. And, since life was sweet there, we had to be there…naturally-y-y! 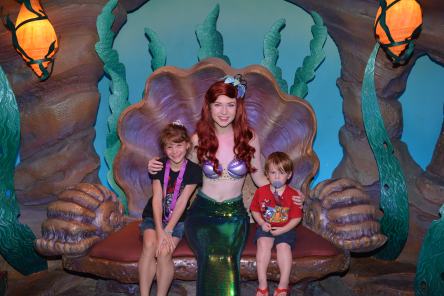 The Jungle Cruise was a must-do attraction for anyone who enjoys really good (or really bad) puns and jokes. On the ride, the boat captains deliver running monologues describing the electronic wildlife guests are viewing from their lazy barge float down the river. So, for instance, entering a dark tunnel, our captain called out, “Who wants to see Santa’s workshop?” and all the children on board cheered, until fake snakes and bobcats came in to view and giggles replaced cheering. On our way out of the boat, our captain advised, “Be sure not to trip as you exit the boat. Because, if you trip, I WILL laugh. And, if I laugh, my boss will fire me.” We almost tripped.

Our day at the Magic Kingdom ended with the iconic firework show over Cinderella’s castle. Before we’d left on her Wish Trip, Mercy had identified four favorite things she absolutely wanted to see or do at Disney. Magic Kingdom’s fireworks were on her list and the entire reason we’d chosen that date to come to that park. (Fireworks are not displayed every single night over the castle, year-round. Check the entertainment directory for show times.) Choosing to stay that late at a park was a gamble for our epileptic child. At every other park, we’d left earlier in the evening, but on this date, we stayed until park closing hours to watch Tink fly off the castle turret, home to Pixie Hollow. We’d stayed to make our daughter’s dream come true.

Mercy was elated. Dan and I were contentedly happy, if worn out. Pierson was konked out cold through the loudest explosions and surround sound musical display on the planet. 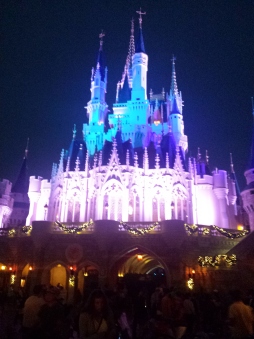 A view of the Castle before the Fireworks. 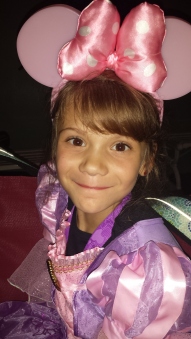 Afterwards, as we walked down the Christmas-lit Main Street towards the park entrance, grabbing coffee and treats on the way, we had one final photo taken to cement the memory of our adventurous day. Our day living Mercy’s dream vacation. Our day celebrating precious life, while half the nation mourned an election. Our day where epilepsy didn’t win or rob, and where this park delivered on it’s promise to be, for us, a magical kingdom.

Days like these, where seizures took a back seat to expectations fulfilled, were rare and beautiful jewels. But in our world managed by uncontrolled epilepsy, they were also always, always costly. Dan and I whispered about it in hushed tones as the children slept in the van on our way back the Village. Concern flickered through our eyes as we carried our son and daughter inside Villa 118 and tucked them into bed.

Mercy had played and laughed, rolled in her wheelchair from unending attraction to attraction, and had poured herself into unrelenting fun from morning to night. What would she pay, in seizures, for this one, long day? For this one, long Wish come true of days spent in magical play? How bad would the morning toll be after her clock struck midnight?

As it would turn out….Pretty. Bad.